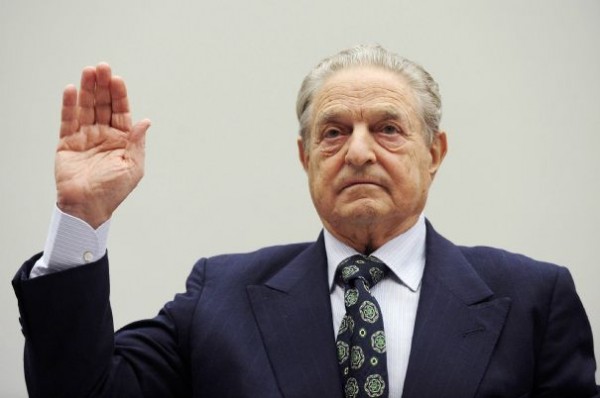 The Evangelical Immigration Table Exposed As Another Soros Front

Politics makes for strange bedfellows goes the old saying. The marriage between a group of Evangelical Christian organizers and George Soros has birthed a new organization called the Evangelical Immigration Table (EIT).

EIT reportedly does not legally exist and is an arm of the George Soros funded National Immigration Forum, which as a “neutral third-party institution” facilitated EIT’s $250,000 radio ad campaign urging Evangelicals to back mass legalization of illegal immigrants.

So if the EIT is just a front, then what exactly is the National Immigration Forum? NIF received over three million dollars from Soros’ Open Society Institute (OSI) in 2009-2010 alone, as well as one million dollars from the left-wing Ford Foundation. Furthermore, Sojourners is also a recipient of Soros’ money, and their President and CEO, Jim Wallis, is prominent within EIT.

All roads seem to lead to Soros, as a cursory glance into the funding of many religious organizations that have publicly advocated for the recent amnesty legislation find their way back to the Hungarian-American’s bountiful leftist check book. Take, for example, the so-called Nuns on the Bus.

This situation of course does not mean that a believer cannot personally advocate for legalizing illegal immigrants without having been bought by George Soros. But the facts point towards a concerted public relations campaign on the part of the progressive religious left funded heavily by one individual who is himself a leftist and an atheist.

The Evangelical Immigration Table is composed of a surprisingly large list of notables from evangelical organizations, presidents of universities, and officials of denominations, and including organizations such as World Relief, Bread for the World, and the National Association of Evangelicals. Very likely most of them were unaware how their endorsement would be exploited to back specific legislation, much less realize that the political venture was the fruit of Soros philanthropy.

Since their public launch in January of this year, timed to overlap with the launch of President Obama’s second term, EIT organized events on religious college campuses, primarily focusing on their “I Was A Stranger” campaign (which, if you haven’t seen it, is a truly masterful piece of emotional blackmail).

When EIT broke onto the public scene at the beginning of the year, they described themselves as a “grassroots organization.” American evangelicalism is a highly fractious movement, and it is highly suspect for any group to claim to represent it as a whole. Most polling suggests that Evangelicals still tend to be more supportive of stricter regulations on immigration than other religious groups. Jim Wallis has recently suggested there has been a “sea change” among the average Evangelical in favor of legalizing illegal immigrants. And yet Evangelicals poll significantly higher in favor of better border security over or at least before creating a “path to citizenship” than does the typical voter. Evangelical elites are defying members of their flock who generally oppose amnesty.

So what led these elites to break ranks with their congregations in favor of amnesty? Various reasons might be offered: some may truly believe that the Gospel calls for more open borders. Some are already part of the institutional Religious Left, such as Jim Wallis. Some may agree with Samuel Rodriguez, President of the National Hispanic Christian Leadership Conference, that Hispanics “have a more complete vision of the gospel.” The revelation of EIT’s funding source as George Soros ads another puzzle piece to the mix.

What are Soros, the open borders lobby, and the progressive left really trying to accomplish? The Left sees a prime opportunity to exploit Evangelical leaders by crafting a media campaign designed to convince the GOP leadership that one of their main constituencies, Bible Belt Christians, favors comprehensive reform.

Some may argue legitimately that some Evangelical elites genuinely see passing amnesty as their Christian duty. Mega funding by leftist philanthropies and high level, publicized political partnerships are added inducements.

But there remains the nauseating fact that some Evangelicals are peddling a new sort of liberation theology to American Christians, aided by a man who has actively supported and financed organizations that directly go against Evangelical beliefs about marriage, abortion, euthanasia and embryonic stem cell research.

As Mark Tooley has previously pointed out, the average Evangelical is at a disadvantage when faced with such an overwhelming number of notables pushing a politically revised version of the Gospel: “Catholic teaching typically explains a hierarchy of public issues, prioritizing marriage and sanctity of life, for example, which are intrinsic to Christian faith, over important but less theologically binding issues of prudential judgment, such as federal entitlement programs or immigration. Evangelicals lack this clear tradition because, in part, they lack much of a tradition overall, being mostly a modern American movement that emerged out of several Protestant traditions.”

This lack of tradition and lack of accountability for some leaders sets up a situation where many Evangelicals might be prone to political manipulation. If that is the purpose of the Evangelical Immigration Table, then it is a sad betrayal of a flock by its shepherds.